An unprecedented private visit to the Venetian Villas to discover the elegance and richness of a by now forgotten era … Thanks to this fascinating tour of the Villas on the Brenta Riviera you can visit three prestigious residences of the past.

Our suggestive itinerary of the Ville del Brenta will take you back to the times of the Republic of Venice, when holidays were done in a villa.

Starting in the 16th century, the rich and noble Venetians began to spend the summer months on the mainland to follow the agricultural work of their lands … But even in the countryside they did not want to give up the luxury and refinement that characterized their buildings on the Grand Canal. Thus were born the splendid Villas of the Brenta: the itinerary we want to propose takes into consideration some of the most beautiful Villas of the Brenta open to the public to give you all the magic and charm of these princely residences decorated by the best artists of the Serenissima.

The visit to the Venetian Villas of the Brenta is concentrated in the area between Malcontenta and Stra’, where the most beautiful and famous villas are located.

The itinerary proposed below is only indicative and can be customized according to your interests with any villas not included, but you wish to visit.

The first stop will be one of the most beautiful Palladian villas on the Brenta Riviera: Villa Foscari called “La Malcontenta”in Mira, in the locality of Malcontenta.

Built for one of the most important families of the Serenissima by the famous architect Andrea Palladio, Villa Foscari is considered one of the Palladian villas not to be missed.

In this enchanted place, art and nature blend perfectly … According to tradition, a young girl of the Foscari family was locked up here all her life to expiate her misconduct … Hence the nickname ‘discontent’ of the Palladian villa.

After the splendid Villa Foscari called ‘La Malcontenta’, the itinerary will continue with Villa Widmann in Mira, one of the most fascinating and best preserved villas on the Brenta Riviera.

At Villa Widmann, the visit will wind through the splendid interiors – its salons with frescoes in the 18th century are a riot of colors, which harmonize perfectly with the golden stuccos and precious Murano glass chandeliers – and the gardens: lush vegetation and statues of classical divinities give Villa Widmann on the Brenta Riviera an absolutely fairytale atmosphere.

After stopping at the first two Brenta Villas that can be visited in our itinerary, you can taste local specialties and relax in one of the tasty restaurants along the Brenta Riviera for a short lunch break.

In the afternoon, the tour will end with the jewel of the Ville del Brenta: in Stra, Villa Pisani will introduce you to the atmosphere of a real palace.

All the movements of this exclusive tour of the Venetian Villas on the Brenta will take place by land. 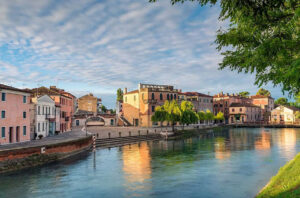 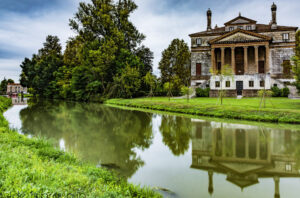 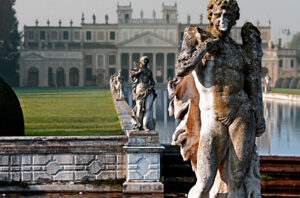 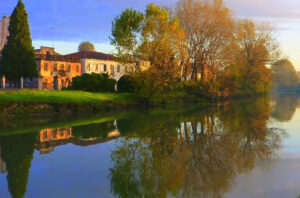 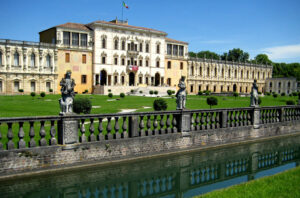